I will be working on a group of objects every Tuesday between 9 AM and 4 PM at the Kings County Museum in Kentville, Nova Scotia for the foreseeable future. The public is invited to drop in and ask questions or observe the conservation work as it progresses.  A body of information is supplied to the museum with all conservation decisions made by the curator based on the information provided.  This is the second group of objects I have worked on for the museum but the first that are being documented via a blog. Comments and questions are welcomed.

Background Information - Dominion Atlantic Railway Roundhouse Demolition
In 2007 the railway roundhouse as shown in the photo to the left was demolished in Kentville, Nova Scotia.  It had been used for many years by the Dominion Atlantic Railway starting in 1912 to do maintenance work on as many as 12 locomotives at once.  Many objects were uncovered in the former railway lands prior to the demolition and donated to the Kings County Museum in the fall of 2005.  They were documented by a Senior Environmental Specialist with the firm Neill & Gunter and became part of the Kings County Museum's permanent collection.  They arrived in three groups (boxes) with most objects wrapped in either white or brown paper labelled with a sequence number.  They are shown unwrapped and laid out in the photos below.  There was a separate box of metal items (not shown).  Overall, they consist of glass, ceramics, metals, and paper items.

There are a few other, much larger objects that are not shown: some very large wrenches and a light on a metal pole.  Also, a set of locomotive wheels attached to an axle were moved from the round house site and installed in front of the museum.  These latter will not be conserved as part of this project. 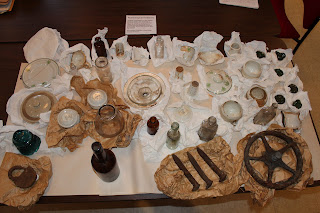 Large group of objects - 28 in total. 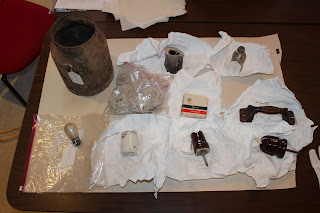 Small group of objects - 11 in total.

Perhaps the most interesting was a "time capsule" dated 1938 which was a metal tin found in a piece of cement in the foundation.  These items are shown in the above photo at the top centre.  Inside this tin was a note listing the names of the seven people who did the foundation upgrade work in 1938 with a promise to pay $1.00 to whoever finds it and contacts a person on the list.  Since all of the people listed have since passed on it was decided that the demolition team should each receive a one dollar bill from 1938 as a reward.
Posted by KellyBou at 22:34

Email ThisBlogThis!Share to TwitterShare to FacebookShare to Pinterest
Labels: background

My goal for this Blog is to:

provide advice and expertise to community museums in Kings County and Nova Scotia,

share ideas on what conservation work can be done on historical objects in a community museum setting where funding is always a challenge,

document my activities at the Kings County Museum in Kentville, Nova Scotia CANADA.

Conservation Tips. This section in some of the posts will provide specific tips on preventive care and conservation treatment. I will be cleaning, stabilizing, and treating objects but also, designing proper storage and preparing exhibits. I hope to provide tips on all of these subjects.

Comments are welcome. Comment by clicking on "No comments" shown in red at the bottom of each post. This also shows as "1 Comment" if there was already a comment. You will be presented with the option to comment and pick a profile such as Anonymous or Google+. Anonymous allows you to comment without registering whereas the other options require you to register first or use an existing account such as Google+ but, in all cases for security reasons I will take a look at them before publishing.

While I hope you find the information in this BLOG and the information provided by those organizations I have listed in Links To Related Websites of use and interest, I expect people to recognize that any work done on an object is a risk and is best performed by trained professionals. I cannot be responsible for any damage done to items due to information provided herein. There are individuals and organizations you can contact as follows if you need assistance.

You can contact the Museum of Natural History at their general information number 1-(902) 424-7353 in Halifax, Nova Scotia if you have questions about an historical artifact or need advice or assistance with artifact conservation.

Canadian Association of Professional Conservators - CAPC is the national accrediting body for conservators. They have a listing of members both geographically and by speciality.